Jail Time for Not Knowing: Strict Liability for Executives Under the Park Doctrine

by Stephen Crain
in Governance

The Eighth Circuit just affirmed the prison sentences of two executives based on their positions of authority and little else. This is a case that should have the attention of every corporate officer.  Austin “Jack” and Peter DeCoster, executives of an egg distribution company, were sentenced to three months in prison for something their company did without their knowledge.  Two Supreme Court cases, the most recent of which was decided in 1975, underpin the legal basis for their convictions under the Responsible Corporate Office doctrine.  In the increasingly regulated world, it is time for a refresher regarding the potential criminal liability that comes with accepting a position at the very top of a company.

The government will prosecute executives who “stand in responsible relation to a public danger” through the Responsible Corporate Officer doctrine (sometimes called the “Park doctrine”). See U.S. v. Dotterweich (1943).  In Dotterweich, the CEO was convicted of violating the Food, Drug and Cosmetic Act (FDCA) although he had no personal knowledge of the infraction, and the company was not convicted of the same crime!  The Supreme Court upheld the misdemeanor conviction, endorsing the common law doctrine that a criminal conviction, without any criminal intent or even knowledge on the part of the defendant, is justified if the defendant is serving as a corporate officer.

The Supreme Court reiterated the Responsible Corporate Officer doctrine in U.S. v. Park (1975).  The Park Court expressly ruled that a criminal conviction based on strict-liability was not unconstitutional.

Park specifies that the prosecutor must prove two elements: (1) that the corporate officer had the authority to either “prevent in the first instance, or promptly correct, the violation complained of,” and (2) that the corporate officer “failed to do so.”  The officer’s authority – even in the absence of knowledge – is enough.  The prosecutor’s prima facie case can apparently be proven off of a business card.

Another oddity is that the Park doctrine is rooted in negligence principles; an officer may be liable for not acting if he had a duty to act.  However, the Park and Dotterweich Courts pointedly failed to require proof of the central tenant of negligence: causation.  Using words like “the highest standard of foresight and vigilance,” “power” and “authority” to describe the responsible corporate officer, the Park Court was satisfied that the jury was conscious of the defendant’s “authority with respect to” the unsanitary conditions that caused the FDCA violation.

The Park Court did, however, open the door to a possible safe haven: The defendant may have a defense if he or she was “powerless to prevent or correct the violation.”  But this affirmative defense is not an easy burden to prove given an executive’s inherent duties.  For example, the defendant in Park, while on cross-examination, was obliged to admit that he was “responsible for … the entire operation of the company” and “for any result that occurs in our company.”  What CEO’s job description does not meet that criteria?

It bears noting that there are other impediments to prosecution.  For example, there are defenses available if the underlying statute expressly requires “knowledge” of the crime committed (U.S. v. MacDonald & Watson Waste Oil Co. (1st Cir. 1991)) or when the statute is not a “public welfare” statute (U.S. v. Arkell (Minn. 2006)).  Also, courts have identified several factors in exercising discretion in applying the Park doctrine, including whether: (a) the statute involves a matter of public policy, (b) the standard imposed by the statute is “reasonable,” (c) the penalty is “small,” (d) the conviction “would gravely affect the reputation of the individual,” (e) whether the crime was cognizable at common law and (f) whether Congress’ purpose would be supported by the lack of an intent requirement.  U.S. v. Freed (11th Cir. 2006); see also U.S. v. Ayo-Gonzalez (5th Cir. 1976).  Even with these “defenses,” the liberal interpretation of the Responsible Corporate Officer doctrine merits – or demands – vigilance.

Weighing the risks of a misdemeanor conviction against the opportunities and benefits of being CEO has been relatively easy.  The penalties for Dotterweich and Park were minor: a $500 fine and 60 days’ probation for Dotterweich, and a $250 fine for Park.  The DeCosters’ case, though, highlights a more significant risk.

As the president and COO of Quality Egg LLC, Jack and Peter DeCoster pleaded guilty in 2015 to violating the FDCA after reports of a salmonella outbreak at their company.  Although the executives had cooperated with the FDA, they were subsequently prosecuted to the full extent of the law.  In April 2015, the trial judge sentenced each of them to three months in prison.  U.S. v. Quality Egg LLC (N.D. Iowa 2015).  The Park doctrine played a determinative role in this case because the parties – and the trial judge – accepted (by way of a plea deal) that the Quality Egg executives “did not have knowledge … that eggs sold by Quality Egg were, in fact, contaminated with [salmonella].”  As a warning to all executives of food and drug companies, the sentencing judge focused on the allegations that the defendants must have known of their warehouses’ unsanitary conditions.

On July 6, 2016, the Eighth Circuit affirmed the judgment.  Harping on the disgusting state of Quality Egg’s facilities and its “egregious” disregard of sanitary procedures, the appellate court said, “When defining the statutory penalties in the FDCA, Congress recognized the importance of placing the burden on corporate officers to protect consumers ‘who are wholly helpless’ from purchasing adulterated food products which could make them ill.” U.S. v. DeCoster (8th Cir. 2016), quoting Dotterweich.

This is not the first time responsible corporate officers have received prison time under the doctrine; in 2011, an executive was sentenced to nine months in prison after he pleaded guilty to violating the FDCA.  U.S. v. Higgins (E.D. Pa. 2011).  What makes DeCoster different from Higgins is that, in Higgins, there was evidence that the defendant actually knew of the violations. These cases are a stark reminder that the Park doctrine threatens more than just embarrassment and headlines.

With the increase in public and government scrutiny regarding incidents involving the public welfare (including the Deepwater Horizon incident and the Blue Bell Ice Cream contamination), the government has promised to ramp up use of the Park doctrine.  Although only about 100 published cases cite Dotterweich in the context of a corporate officer’s criminal liability, 20 of those have been since 2000.

It is hard to know how often the Responsible Corporate Officer is actually used.  Unquestionably, prosecutors use the doctrine as a bargaining chip in settlement negotiations before charges are ever brought.  It bears noting that the underlying statute must create liability before an officer can be charged, and only a few federal statutes actually have the term “responsible corporate officer” in the definition of an “individual” subject to criminal sanctions — the FDCA, Clean Water Act and Clean Air Act.  CERCLA provides the government ample latitude to prosecute.  It defines potentially liable “persons” simply as “any person who at the time of disposal of any hazardous substance owned or operated any facility at which such hazardous substances were disposed of.”  42 U.S.C.A. § 9607 (West).

Any corporate officer who has the authority to prevent or correct his company’s actions should be aware that he may be subject to strict liability if the company is in violation of a public welfare statute.  As the law stands, being ignorant of a corporation’s criminal acts will not save an executive from the very real possibility of facing punishment, including, remarkably, incarceration. 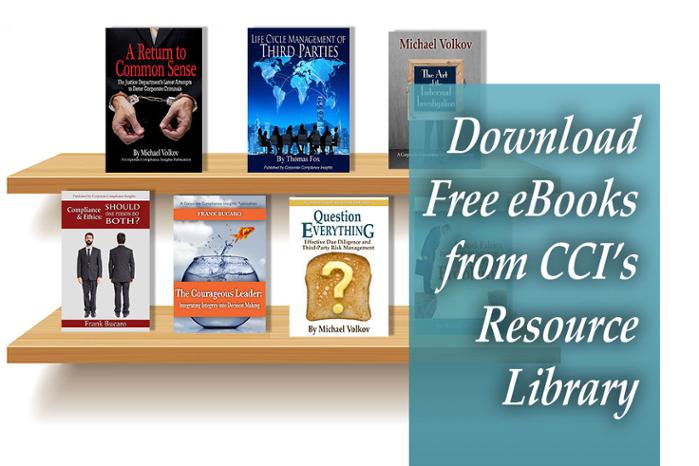 Stephen Crain is a trial lawyer in Bracewell’s Houston office. He is the firm-wide Chair of the Litigation Group and serves on the firm’s Management Committee. He counsels clients on matters arising in the energy industry and disputes involving alleged violations of securities laws (including representing public companies, officers and directors and special committees).

Recent SEC Charges Suggest CCOs Have Target on Their Backs

by Brian Rubin and Adam Pollet

The SEC’s prosecution of chief compliance officers remains a fraught and controversial topic. A recent announcement of an enforced settlement...

Survey Results: Compliance Officers May Experience Mental Health Issues In Part Because They Feel They Have ‘No Permission to Fail.’

No one has surveyed the mental health and working conditions of compliance officers for 10 years. We decided that was...

Though broad in scope, the Biden Administration's plan to counter domestic and international corruption follows four primary lines of effort....